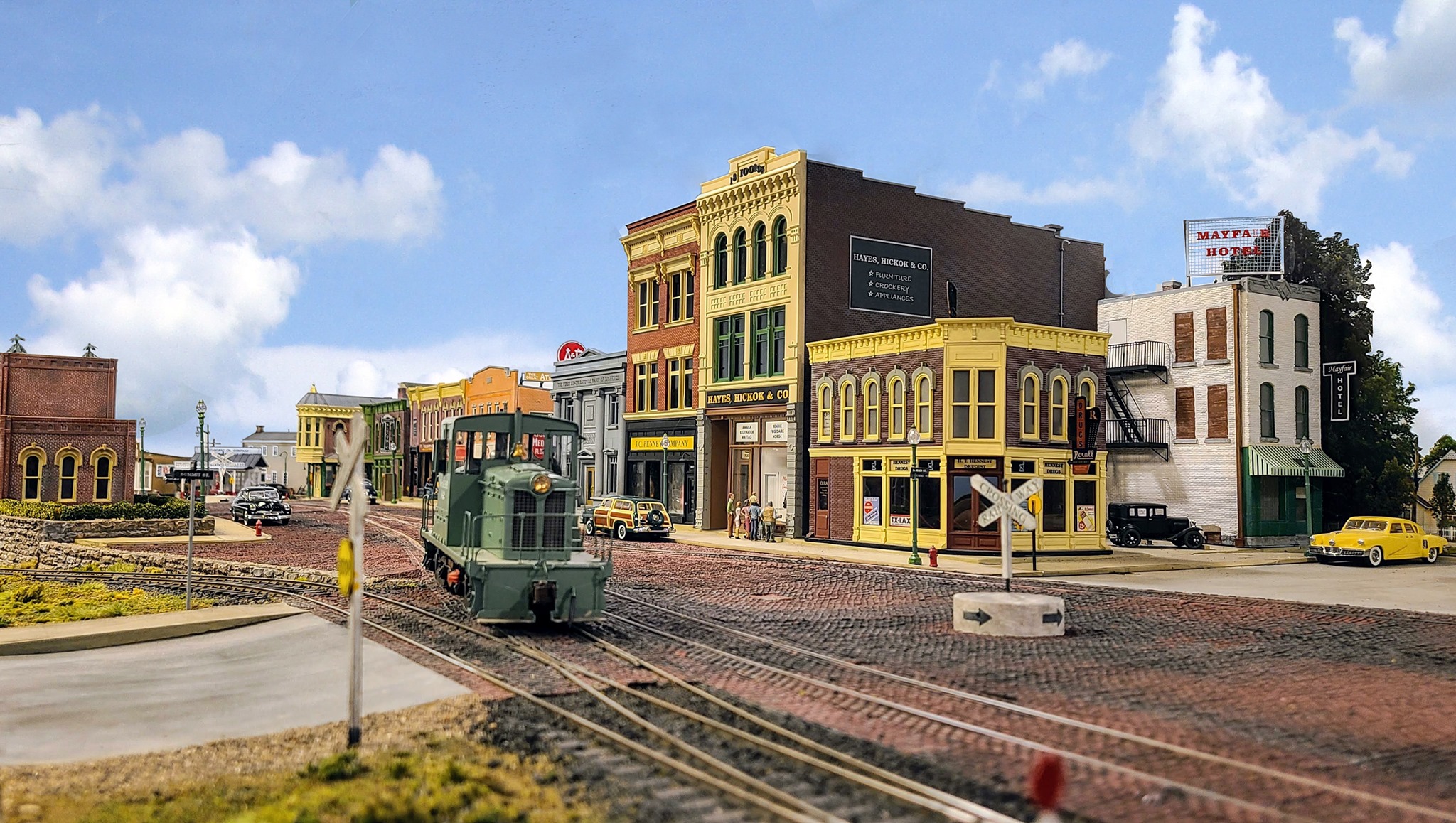 Proto48 is a subset of the larger O scale model railroad hobby. We build to exact scale standards for wheels and track gauge.

The history of model railroading has been one of steady and constant improvement in the quality and accuracy. As more information has become available modelers have attempted to make their models more accurately. In the 1960’s a group of modelers decided to change the fundamental relationship of wheel contour and gauge in an attempt to create a more realistic model that would operate better and more reliably than the traditional NMRA O gauge standard. The change entailed the adoption of a scale replica of the AAR standards used by full-sized railroads. The wheel profile was changed to a scale 5.5″ in width with a scale flange depth of approximately 1″. The gauge was corrected to a prototypically correct 4′ 8 1/2″ rather than the traditional 5′ gauge used by modelers since the scale’s inception. To more accurately identify this subset of O scale, the new standards were referred to as 1/4″AAR scale or gauge.

Some of the earliest of pioneers in this movement were Lee Klaus, Al Henning, and Bill Clouser. The first 1/4″AAR models were converted O gauge. The early conversion work required considerable skill to machine new wheels and tires or cut down the old NMRA standard wheels and re-gauged them. You could not buy track gauges, profiling tools to cut the wheel shape or even a set of published standards.

The initial breakthrough came when Al Henning started to offer 1/4″AAR wheel sets in the late 1960s. Bob Brown’s legendary Fine-Lines magazine published the first 1/4″AAR standards and became the source for information on products and conversion techniques. Lee Klaus did a number of articles on converting O gauge locos to the new standards. Bill Clouser was busy building magnificent 1/4″AAR traction models in his St. Louis basement. Photographs of his models were featured in the Model Railroad magazine. His accurately scale wheels helped create the look of realism. Bill Clouser started to offer many of his 1/4″ scale parts including scale wheels. Later on Grandt Line produced a 1/4″AAR wheelset that had full detail on the front and cooling ribs on the back. NorthWest ShortLine entered the market with steel wheels. The next innovation came in the 1996/1997 timeframe when James Harper and Steve Grabowski created an extremely accurate 33″ and 36″ scale wheel. This wheel was different from the NWSL wheel in that it had a full wheel contour on the front and the back. There were improvements in the fillet and a 20:1 taper on the thread. The Grabowski wheels made quite an impression with their wheel contour and tapered axel. Jim Harper sold all 8,000 axles. When Protocraft took it over, Steve and Norm Buckhart added a wide range of wheel/axle size to represent 30 through 100-ton wheels. Protocraft has sold over 26,000 axles.

The 1/4″AAR movement continued through the 1970’s and into the 1980’s with little or no change. In 1984, an impromptu meeting was organized during the 1984 O Scale Convention in Burlingame, CA. to establish a set of standards and to get them adopted by the NMRA as an alternative to 5′ gauge. One of the objectives of this movement was to adopt new terminology to differentiate from previous efforts. The term PROTO:48, or simply P:48 was determined to more fully express the movement as a concept rather than a gauge differentiation. It was understood to mean accurate scale dimensions in modeling. This brings several aspects into the fore that often times are neglected. This means that track and roadbed should appear as scale roadbed. The tie plates should be visible along with rail joints, anchors, fishplates, and track bolts. Switches should have scale bridles, frogs, guardrails, and by all means, flangeways should be proportionate. These same ideas should be carried over to the rolling stock. Many commercial kits contain parts that are grossly oversized which detract greatly from the finished product. Scale hardware applied to cars greatly enhances the visual credibility to any model. If one desires to model dual gauge, there will be a visible difference between O gauge and P:48. P:48 would include On3 as a rendition of 3-foot narrow gauge and On2 as 2-foot narrow gauge. Meter gauge and various broad gauges can also be referred to as P:48 in the scale proportions. The naming convention used was similar to the P4 (4mm scale) movement in England. The NMRA subsequently adopted the standards finally recognizing a movement started 20 years prior. Randy Wilson volunteered to carry the desires of the group to the NMRA standards committee and get standards established which was done with the assistance of Jerry White, then of the NMRA standards committee.

In July 1985 at the NMRA 50th Anniversary Convention in St. Louis, MO, Thomas B. Moore won 1st and 2nd place with Randy Wilson winning 3rd place in the Diesel model category. All three models were set to 1/4″ AAR standards. Afterwards, Moore and Wilson agreed to collaborate on promoting 1/4″ AAR, along with Moore’s friend, Roger Akester. Wilson wrote NMRA President Paul Shimada in January 1986 and recommended that the NMRA consider a new Technical Department Committee specifically to deal with 1/4″ AAR and volunteered for the post. Shimada referred the matter to Department Chairman Jim Monroe, who appointed Wilson to head 1/4″ Finescale Committee 636.2. The position later broadened to include all scales. By the time of the O Scale National Convention at the Marriott Hotel in Burlingame, CA in June 1986, Wilson had sent inquiries to a number of manufacturers and called a meeting for interested parties at the convention. Discussion began with many ideas about the name but quickly came to turn on a remark by Stan Padgett that the name needed to be useful in other scales besides 1/4″. Wilson turned to the chalkboard and wrote, “PROTO: 48”, the room fell silent for a moment and everyone agreed that was it.

After the meeting was over, Wilson signed up Bill Boren of KTM, Dale Darney of V&T Shops, Jim Harper of High Sierra Models, Thomas B. Moore of Thomas B. Moore Company and Bob Smith of Central Locomotive Works to serve on his committee. From that point forward, 1/4″ AAR became PROTO:48 and began to gain it’s legitimacy within the NMRA. Wilson fought for two more years for recognition within NMRA, while Moore published a PROTO:48 Newsletter during that time.

Today, Proto: 48 is firmly established as an alternative to O gauge. A wide range of products is offered increasing the pleasure of accurate model building and operation. You can purchase wheels, trucks, flex track, scale turnout kits, diesel conversions, and even Proto:48 steam locos. It is possible to model in Proto:48 without even owning a lathe or the knowledge on how to operate it. Firms offering this service can convert even steam locos. Protocraft and NWSL have developed drop-in geared wheelsets to convert P&D, Weaver, Car Works and Atlas diesels. Protocraft sells a wide range of wheels and loco tires to ease the conversion process.Recently, Glacier Park Models has imported a number of Southern Pacific steam locomotives with optional P48 conversion drivers and wheels. The models can be converted within a few hours using simple tools. RY Models has imported several diesels with P48 wheels installed along with a wide range of trucks.